A Home Movie with a Plot!

A Child Star in the Making!

Directed by Jeffrey A. Brown

Posted by Jennifer at 3:42 PM No comments: 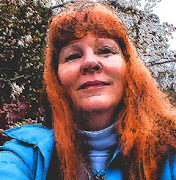